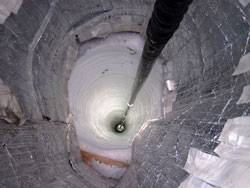 A massive telescope buried in the Antarctic ice has detected 28 extremely high-energy neutrinos—elementary particles that likely originate outside our solar system. Two of these neutrinos had energies many thousands of times higher than the highest-energy neutrino that any man-made particle accelerator has ever produced, according to a team of IceCube Neutrino Observatory researchers that includes Penn State scientists. These new record-breaking neutrinos had energies greater than 1,000,000,000,000,000 volts or, as the scientists say, 1 peta-electron volt (PeV).


"Scientists have been searching high and low for these super-energetic neutrinos using detectors buried under mountains, submerged in deep lakes and ocean trenches, lofted into the stratosphere by special balloons, and in the deep clear Antarctic ice at the South Pole," said Penn State Professor of Physics and Astronomy and Astrophysics Doug Cowen, who has worked on IceCube for over a decade. "To have finally seen them after all these years is immensely gratifying." The discovery was announced this week at the IceCube Particle Astrophysics Symposium in Madison, Wisconsin.

R&D: Record-breaking high-energy particles detected by telescope buried in Antarctic
Posted by physics4thecool at 7:23 AM