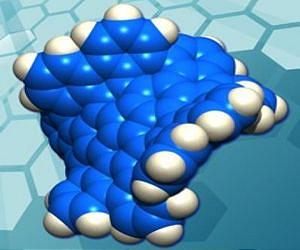 Chemists at Boston College and Nagoya University have together synthesized the first example of a new form of carbon, the team reports in the most recent edition of the journal Nature Chemistry. This new material consists of many identical piece of grossly warped graphene, each containing exactly 80 carbon atoms joined together in a network of 26 rings, with 30 hydrogen atoms decorating the rim. These individual molecules, because they measure somewhat more than a nanometer across, are referred to generically as “nanocarbons,” or more specifically in this case as “grossly warped nanographenes.”

Graphene sheets prefer planar, 2-dimensional geometries as a consequence of the hexagonal, chicken wire-like, arrangements of trigonal carbon atoms comprising their two-dimensional networks. The new form of carbon just reported in Nature Chemistry, however, is wildly distorted from planarity as a conse­quence of the presence of five 7-membered rings and one 5-membered ring embedded in the hexagonal lattice of carbon atoms.


Odd-membered-ring defects such as these not only distort the sheets of atoms away from planarity, they also alter the physical, optical, and electronic properties of the material, according to one of the principal authors, Lawrence T. Scott, the Jim and Louise Vanderslice and Family Professor of Chemistry at Boston College.

Need you to "get some skin in the game," academically speaking. Don't just think of mobile technology: look around you and notice how much electronics surrounds you, from your flatscreen to your laptop to your iron that "knows" when to shut off; your remote key fob that warms your car up on a cold morning. Faster computers that could help us cure diseases; explore space for colonization; end hunger (and yes, for you "reality bites" fans): start wars.

But with the right values, and the right people studying the technology: it could help end them too.

Space Daily: A new form of carbon: Grossly Warped 'Nanographene'
Posted by physics4thecool at 4:00 AM