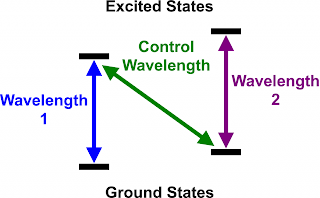 Optical connections are slowly replacing wires as a means of shuffling bits in between systems—there are already plans afoot to have different components within a single system communicate via an optical connection. But, so far at least, all the processing of those bits is taking place using electrons.

Yesterday's edition of Science includes a demonstration of an all-optical transistor that can be switched between its on and off states using a single photon. Although it's an impressive demonstration of physics, the work also indicates that we're likely to stick with electrons for a while, given that the transistor required two lasers and a cloud of a cold atomic gas.

The work relied on a cold gas of cesium atoms. These atoms have an extremely convenient property: two closely separated ground states, each with a corresponding excited state. All of these states are separated by an energy that corresponds to a specific wavelength of light, so using a laser of that wavelength allows you to shift the system into a different state.

Ars Technica: Optical transistor switches states by trapping a single photon
Posted by physics4thecool at 4:00 AM