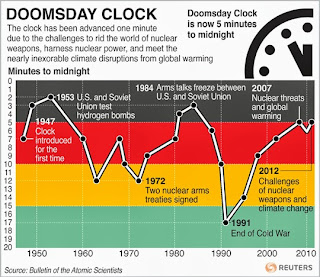 Reuters
My departure from physics I reserve for Sundays. Somewhat a double entendre most days; I am aware from the stats these are my least viewed postings; I call them my "sermons slightly left of the mount." As much as I'd like to focus on science and physics exclusively, public inanity from public officials drives my rants, and unfortunately, they decide the purse strings for scientific research. That thought alone is quite scary.

I grew up in the era of the doomsday clock and inane "duck and cover" drills of an ever-pending nuclear apocalypse. Recently, climate change has been counted in our path towards self-immolation.

The Intergovernmental Panel on Climate Change has released its most decisive report, and it's not good. However, what also is not good is our lack of trust of science, the convolution of pseudo controversies, of which there is a litany, but essentially: anything that threatens a bottom-line of power, profit and influence must be obfuscated.

I tend to agree with Bill Nye. I selfishly want to save the planet...for myself and my children, and their children. The planet will be here: it is arrogance to believe that we will always be.

The link to the report is below. I will most likely as I'm apt to do, print it out, highlight it and consume what the report says to be informed on its findings.

In the US at least, our media is consolidated into six corporate behemoths, everything we see in news and entertainment. During "duck and cover" days, that was greater than 150. Profit, ratings...and control are the primacy of goals in this arrangement. Now: The stock market is almost a 70's mood ring; talk radio flourished after repeal of the Fairness Doctrine; media can legally lie to us; thus "water cooler conversations" are always orchestrated in a kind of larger hive hierarchy, and we are not at the level of Horus' eye. "Ditto head" was not meant a compliment, nor evidence of deep contemplation. "Dumb and Dumber" and "Idiocracy" were box office hits; I didn't think they'd become the operative outline for our congress. A humorous urban myth tries to define congress as a "gathering of baboons" (it literally is not, but life imitates rumored art). It was a slow road to get here, but we are here. When "Green Eggs and Ham" become part of the record on in the Senate for a "silly buster," our decent; our devolution is apparent and quite public indeed. My childhood memories are henceforth ruined.

In my challenge, I'm trying to inform your water cooler conversations beyond the Borg collective. Your emancipation is in knowledge; and that is not what the six behemoths desire for you.

I simply don't want "once upon a time" to apply to Earth in nursery rhymes for children on distant worlds...as an intergalactic proverb.

The Atlantic: Leading Scientists Weigh-In on the Mother-of-All Climate Reports
IPCC: The Intergovernmental Panel on Climate Change
Report: Climate Change 2013
Posted by physics4thecool at 4:00 AM