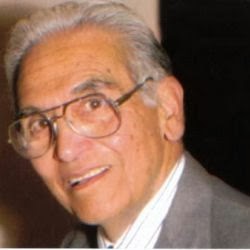 Albert Vinicio Baez, Ph.D. (November 15, 1912,[1] – March 20, 2007[2]) was a prominent Mexican-American physicist, and the father of singers Joan Baez and Mimi Fariña. He was born in Puebla, Mexico, and his family moved to the United States when he was two years old because his father was a Methodist minister. Baez grew up in Brooklyn and considered becoming a minister before turning to mathematics and physics. He made important contributions to the early development of X-ray microscopes and later X-ray telescopes.
Baez earned his bachelor's degree in mathematics from Drew University in 1933 and then a master's degree in physics from Syracuse University in 1935. In 1936, he married Joan Chandos Bridge, the daughter of an Episcopalian minister. The couple became Quakers and had three daughters: Pauline, Joan and Mimi. Together they moved to California, where he pursued a doctorate in physics. In 1948, along with Stanford University professor Paul Kirkpatrick (1894–1992), Baez developed the X-ray reflection microscope for examination of living cells. This microscope is still used today in medicine. Baez received his PhD in physics from Stanford in 1950. After graduating, he developed zone plates—concentric circles of alternating opaque and transparent materials to use diffraction instead of refraction to focus X-rays. Unfortunately, much of his work had to await the development of synchrotron X-ray sources several decades later.
At a private dinner in 1982, when asked how it was to be the father of a famous person, Baez told the following story with great delight:[5] "I was at a conference dinner, and as usual a young man was looking carefully at my name tag. Finally, he got up the courage to ask the inevitable question about my relationship to Joan Baez. But instead he asked, 'Are you Albert Baez, the inventor of the X-ray microscope?' Now, THAT was a compliment!"
Wikipedia page: Albert Vinicio Baez, Ph.D.
Posted by physics4thecool at 4:30 AM