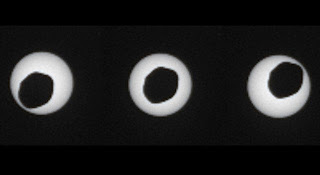 Images taken with a telephoto-lens camera on NASA's Mars rover Curiosity catch the larger of Mars' two moons, Phobos, passing directly in front of the sun -- the sharpest images of a solar eclipse ever taken at Mars.

The images are the first full-resolution frames downlinked to Earth from an Aug. 17, 2013, series. The series may later provide a movie of the eclipse. Curiosity paused during its drive that day to record the sky-watching images.

"This event occurred near noon at Curiosity's location, which put Phobos at its closest point to the rover, appearing larger against the sun than it would at other times of day," said Mark Lemmon of Texas A&M University, College Station, a co-investigator for use of Curiosity's Mastcam. "This is the closest to a total eclipse of the sun that you can have from Mars."

DEIMOS (or Deimus) was the god (daimon) of fear, dread and terror, and his twin-brother PHOBOS (Phobus) of panic fear, flight and battlefield rout. reference

Mars has two known moons, Phobos and Deimos,[1] which are thought to be captured asteroids.[2] Both satellites were discovered in 1877 by Asaph Hall[3] and are named after the characters Phobos (panic/fear) and Deimos (terror/dread) who, in Greek mythology, accompanied their father Ares, god of war, into battle. Ares was known as Mars to the Romans. It is possible that Mars may have moons smaller than 50 – 100 meters and a dust ring between Phobos and Deimos may be present but none have been discovered.[4] Wikipedia

Science Daily: NASA Mars rover views eclipse of the sun by Phobos
Posted by physics4thecool at 4:00 AM