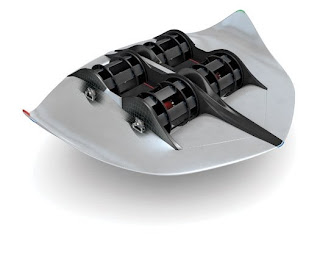 Last year, the Austrian engineering firm IAT21 set out to construct a flying machine that floated like a hummingbird, traveled as fast as a jet, was as quiet as a hot-air balloon, and was simple enough that a car mechanic could repair it. The company’s working prototype, called D-Dalus, is roughly five feet by three feet square and can lift about 100 pounds. But the size and lift are not what’s most impressive. A flying machine with no airfoil, rotor or jet propulsion can travel where most cannot: in very tight spaces and through terrible weather.


ROTOR ASSEMBLIES
The craft’s four rotors spin at 2,200 rpm, and six blades attached to carbon-fiber disks create directional thrust. The blades act as mini airfoils, their angle of attack constantly shifting in relation to rotation. For vertical lift, a blade’s leading edge rises away from the center of the disk at the top of its rotation and toward the center of the disk at the bottom [pictured], creating a pressure differential.

FRICTIONLESS BEARINGS
Existing bearings were unable to withstand 1,000 Gs of force between the carbon-fiber disks and their blades and still deliver some degree of maneuverability. Engineers at IAT21 developed their own bearings, shaped like metal barrels, that hold up to the force better than spheres (think: arches) but can still roll enough for the blades to move.

In Greek mythology, Daedalus /di:dəlɪs/ or /dɛdəlɪs/ (Ancient Greek: Δαίδαλος, meaning "clever worker"; Latin: Daedalos; Etruscan: Taitale) was a skillful craftsman and artisan.[1][2] He is the father of Icarus and Iapyx and the uncle of Perdix.


Daedalus is first mentioned by Homer as the creator of a wide dancing-ground for Ariadne.[12] He also created the Labyrinth on Crete, in which the Minotaur (part man, part bull) was kept. In the story of the labyrinth Hellenes told, the Athenian hero Theseus is challenged to kill the Minotaur, finding his way with the help of Ariadne's thread. Daedalus' appearance in Homer is in an extended simile, "plainly not Homer's invention," Robin Lane Fox observes: "he is a point of comparison and so he belongs in stories which Homer's audience already recognized."[13] In Bronze Age Crete, an inscription da-da-re-jo-de has been read as referring to a place at Knossos,[14] and a place of worship.[15]

In Homer's language, objects which are daidala are finely crafted. They are mostly objects of armour, but fine bowls and furnishings are daidala, and on one occasion so are the "bronze-working" of "clasps, twisted brooches, earrings and necklaces" made by Hephaestus while cared for in secret by the goddesses of the sea.[16] Wikipedia

Popular Science: How D-Dalus Flies Like Nothing Else
Posted by physics4thecool at 4:00 AM