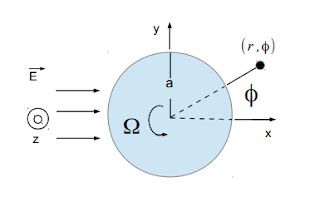 ABSTRACT:
By Bernoulli's law, an increase in the relative speed of a fluid around a body is accompanies by a decrease in the pressure. Therefore, a rotating body in a fluid stream experiences a force perpendicular to the motion of the fluid because of the unequal relative speed of the fluid across its surface. It is well known that light has a constant speed irrespective of the relative motion. Does a rotating body immersed in a stream of photons experience a Bernoulli-like force? We show that, indeed, a rotating dielectric cylinder experiences such a lateral force from an electromagnetic wave. In fact, the sign of the lateral force is the same as that of the fluid-mechanical analogue as long as the electric susceptibility is positive (ε>ε0), but for negative-susceptibility materials (e.g. metals) we show that the lateral force is in the opposite direction. Because these results are derived from a classical electromagnetic scattering problem, Mie-resonance enhancements that occur in other scattering phenomena also enhance the lateral force.
Physics arXiv: Optical "Bernoulli" Forces
Posted by physics4thecool at 4:00 AM