I have a multiple choice question for you.

What’s inside a black hole?

(A) An unlimited amount of stuff.
(B) Nothing at all.
(C) A huge but finite amount of stuff, which is also outside the black hole.
(D) None of the above.

The first three answers all seem absurd, boosting the credibility of (D). Yet … at the “Rapid Response Workshop” on black holes I attended last week at the KITP in Santa Barbara (and which continues this week), most participants were advocating some version of (A), (B), or (C), with varying degrees of conviction.

When physicists get together to talk about black holes, someone is bound to draw a cartoon like this one: 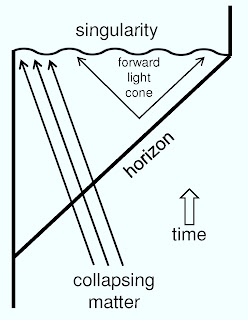 But for nearly 40 years now, we have known that black holes can shed their mass by emitting radiation, and presumably this process continues until the black hole disappears completely. If we choose to, we can maintain the black hole for as long as we please by feeding it new stuff at the same rate that radiation carries energy away. What I mean by option (A) is that the radiation is completely featureless, carrying no information about what kind of stuff fell in. That means we can hide as much information as we please inside a black hole of a given mass.

On the other hand, the beautiful theory of black hole thermodynamics indicates that the entropy of a black hole is determined by its mass. For all other systems we know of besides black holes, the entropy of the system quantifies how much information we can hide in the system. If (A) is the right answer, then black holes would be fundamentally different in this respect, able to hide an unlimited amount of information even though their entropy is finite. Maybe that’s possible, but it would be rather disgusting, a reason to dislike answer (A).

There is another way to argue that (A) is not the right answer, based on what we call AdS/CFT duality. AdS just describes a consistent way to put a black hole in a “bottle,” so we can regard the black hole together with the radiation outside it as a closed system. Now, in gravitation it is crucial to focus on properties of spacetime that do not depend on the observer’s viewpoint; otherwise we can easily get very confused. The best way to be sure we have a solid way of describing things is to pay attention to what happens at the boundary of the spacetime, the walls of the bottle — that’s what CFT refers to. AdS/CFT provides us with tools for describing what happens when a black hole forms and evaporates, phrased entirely in terms of what happens on the walls of the bottle. If we can describe the physics perfectly by sticking to the walls of the bottle, always staying far away from the black hole, there doesn’t seem to be anyplace to hide an unlimited amount of stuff.

Quantum Frontiers: What's inside a black hole?
Posted by physics4thecool at 4:00 AM