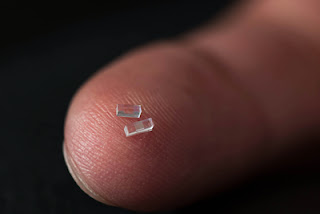 Two independent teams of physicists have used small pieces of glass etched with tiny gratings to accelerate electrons through enormous electric-field gradients. One team boosted the kinetic energy of the electrons at about the same rate as a conventional particle accelerator, while the other achieved 10 times that speed. The technology could one day be used to build table-top accelerators that are much smaller than conventional devices, bringing the benefits of particle-beam therapy to a wider range of cancer patients.


Laser-driven particle acceleration has been the subject of intense research over the past two decades, having been used to accelerate electrons, protons and other charged particles. Although several different techniques can be used, they all involve firing an intense pulse of laser light at a target. The intense electric field of the pulse separates electrons from the positively charged nuclei, creating a very strong electric field that can then be used to accelerate charged particles.
This latest breakthrough was made independently by two groups: one in the US and the other in Germany. The US team was led by Robert Byer of Stanford University and included physicists at the SLAC National Accelerator Laboratory, the University of California, Los Angeles and the Tech-X Corporation. In their set-up, a beam of electrons is first accelerated to a kinetic energy of about 60 MeV moving at near to the speed of light using the Next Linear Collider Test Accelerator Facility at SLAC. The other team was led by John Breuer and Peter Hommelhoff of the Max Planck Institute of Quantum Optics in Garching, whose device works for much less energetic 28 keV electrons travelling at about one-third the speed of light.