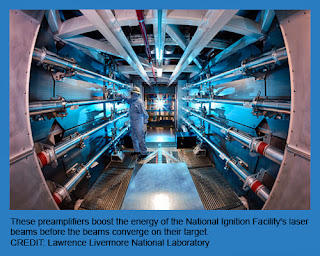 Researchers at Lawrence Livermore National Laboratory say they have tripled the number of neutrons produced by fusion in tiny capsules of deuterium and tritium and thus have moved the National Ignition Facility a step closer to its goal of sustained nuclear fusion. The 13 August firing of NIF's 192-beam laser yielded 3 × 1015 neutrons, whose total energy reached 8 kilo-joules. That output was nearly twice the 5 kJ of energy that produced the plasma in the peppercorn-sized sphere of fusion fuel, says Ed Moses, the lab's principal associate director for NIF.

The result puts NIF a factor of four to five away from ignition, says Moses; last fall the Department of Energy reported that NIF was an order of magnitude away from its goal. Only a factor-of-two increase in plasma energy will be needed to attain alpha heating, an intermediate milestone at which alpha particles from fusion reactions contribute twice as much energy to the plasma as the laser does.


Note the National Ignition Facility was the "warp core" engineering for the movie "Star Trek: Into Darkness." I've mentioned this before, as not only a means of diminishing our dependence on foreign oil, and thus volatile regions of the world: it could change our whole paradigm as a country and a species - heating, energy consumption, food prices at the grocers (determined by fossil fuel prices); income inequality...if we let it.

Of course, we'll have to get through the self-immolation also known as the government shutdown (I really tried to avoid mentioning that).