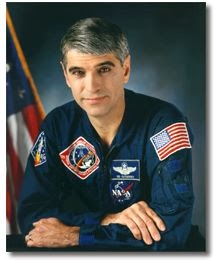 EDUCATION: Graduated from Valley High School, Albuquerque, New Mexico, in 1969; received a bachelor of science degree in aeronautical engineering from the U.S. Air Force Academy in 1973, and a master of arts degree in management from Webster College in 1977.

EXPERIENCE: Gutierrez was a member of the National Collegiate Championship Air Force Academy Parachute Team with over 550 jumps, and a Master Parachutist rating. After graduation from the Academy he completed undergraduate pilot training at Laughlin Air Force Base in Del Rio, Texas. He remained there as a T-38 instructor pilot from 1975 through 1977. In 1978 Gutierrez was assigned to the 7th Tactical Fighter Squadron at Hollomon Air Force Base, Alamagordo, New Mexico, where he flew the F-15 Eagle. He attended the USAF Test Pilot School in 1981 and was assigned to the F-16 Falcon Combined Test Force after graduation. While there, Gutierrez served as primary test pilot for airframe and propulsion testing on the F-16 aircraft. Test projects included the F-100 Digital Electronic Engine Control, F-16C & D Model Structural and Performance Testing, F-16 Maximum Performance Braking Tests, and F-16 Mobile Arrestment Qualification.

He has logged over 4,500 hours flying time in approximately 30 different types of airplanes, sailplanes, balloons, and rockets.