A little something to do while vegging on the couch (nothing on the "boob tube" except COSMOS, really). 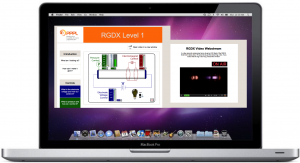 Controlling a lab from home

The Remote Control Glow Discharge (RGDX) is a plasma that you can control from the comfort of your browser. YOU have control of the entire experiment including the gas pressure inside the tube, the voltage produced by the power supply that makes the plasma, and the strength of an electromagnet surrounding the plasma. You can perform experiments from any computer anywhere in the world! 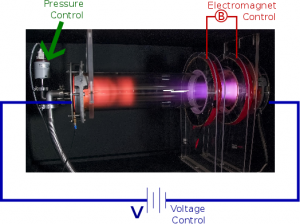 In 2002, we began developing plasma sources for educational purposes and one of our devices won 2nd place in the National Apparatus Competition sponsored by the American Association of Physics Teachers. In 2003, we began controlling our plasma sources by computer for a plasma exhibit in a science museum. The progression of this has led to remote control of a plasma from any location by anyone with an internet connection. This type of control could serve as an experimental component of an online physics class or for a school that typically does not have plasma physics equipment.

As with all other Science Education Department labs, the RGDX has been developed in large part by high school and undergraduate interns.

The Remote Glow Discharge Experiment was officially released to the public on 3/12/2014. The story can be found here.