Below is a repost of a Thursday, March 28, 2013 article "Yin and Yang." Even though the quotes attributed to Einstein I've seen questioned, please note the video embed below. It's no longer speculation. We're here now. The next mass shooting will be undetectable by standard systems; untraceable by serial numbers. Since a 3D printer is not an unsubstantial expense, it will likely be a white male, "lone wolf," but never a "thug" or "terrorist." Or maybe it will be, since an Amazon account can get you a descent one delivered to your doorstep in 2-5 days. It's just the carnage a hostile power bent to turning our daily crumbling republic into a wasteland would want.


Yin and yang are actually complementary, not opposing, forces, interacting to form a whole greater than either separate part; in effect, a dynamic system. Everything has both yin and yang aspects, (for instance shadow cannot exist without light). Either of the two major aspects may manifest more strongly in a particular object, depending on the criterion of the observation. The concept of yin and yang is often symbolized by various forms of the Taijitu symbol, for which it is probably best known in Western cultures. (Wikipedia) 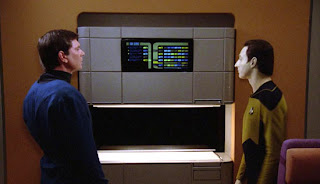 Star Trek Blog: Star Trek’s replicator is an amazing technology concept that has fascinated us for decades. Working at the molecular level to synthesize materials, the replicator is able to instantly produce nearly any object, food or medicine on demand. It is easy to imagine how the replicator would quickly change the world. Such a device could dramatically reduce or even eliminate the cost of most products. Hunger and poverty would be stamped out worldwide, and much of the time and energy spent working for a living could be used instead for pursuits of education, exploration and the advancement of society.

Star Trek envisions the future of humanity to be one of incredible achievements made possible by evolved philosophies as well as technologies. This hopeful view of tomorrow is perhaps the reason so many have dreamed of inventing real-life versions of Star Trek tech -- from the transporter to the tricorder -- and the replicator is one of the most coveted.

A process called “additive manufacturing,” or its more popular nickname, “3D Printing,” has captured the imagination of the tech industry. These machines work much like the two-dimensional printer you may have on your desk, but instead of printing a layer of ink, a 3D printer extrudes many layers of melted plastic to form a physical object. You can imagine this as similar to a hot glue gun, where the heated glue stick is carefully extruded from a nozzle. In the case of a 3D printer, that nozzle is controlled by software and digital design files that tells it how to form a shape.

The comparisons between 3D Printing and the Star Trek replicator don’t end with plastic. Other materials like wood, metal and even some foods are now being extruded in similar ways to make on-demand creations. This has led to excited speculation that soon we may see the beginnings of a new era of manufacturing in America and around the world, where small-scale production is possible at very low costs. We may even “print” biotechnologies and human organs one day.

Gene Roddenberry's underlying message of the future: eternal optimism. As much as I am a fan, I'm afraid I possess a healthy dose of skepticism. Even the Star Trek Memory Alpha Wiki mentions some rough roads prior to 1st Contact with Vulcan. I sincerely hope "life does [not] imitate art" in this case (the "rough road" part; 1st Contact would be OK).

The last five mass extinction events were completely involuntary; unassisted since we hadn't showed up just yet. I end below the embed with two quotes from Einstein:


“I don't know what weapons will be used in world war three, but in world war four people will use sticks and stones.”


"We cannot despair of humanity, since we ourselves are human beings."