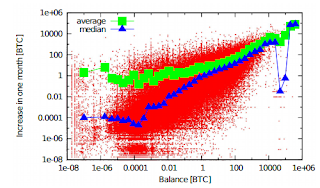 Based upon the mood and tenor of the 50th anniversary reenactment of the March on Washington, this simulation by Econo Physicists seems not to shed light on much hope of things getting more equitable.
Slouching towards dystopia...
From Technology Review


The Matthew effect
In January 2009, a small group of Internet enthusiasts began an unusual economic experiment when they began to trade a new type of digital cash known as BitCoin. After a shaky start, the idea caught on and grew rapidly after 2011.
Today, bitcoins can buy a wider range of goods and services. In total, the BitCoin marketplace has hosted over 17 million transactions and the value of all the bitcoins in circulation is over $1 billion.
One interesting aspect of this marketplace is that the complete list of all transactions is publicly available. And this gave Daniel Kondor and buddies at Eotvos Lorand University in Hungary an idea.
Kondor and co say that the evolution clearly occurred in two separate phases. Before 2011, the system was used only by a few enthusiasts and the bitcoins had no real-world value. During this time, there was little activity and the various measures of network structure varied hugely.
In 2011, however, BitCoin began to get significant media coverage which attracted many more users. The currency also became more attractive after an exchange was set up that allowed bitcoins to be traded for dollars. During this second phase, bitcoins started to function as a real currency.
The team’s key finding from this second phase is related to wealth accumulation. Kondor and co say that the network grew by preferential attachment. In other words, a node with a large number of links is likely to attract more links than a node with only a few links.
This is a well-known effect in network science. Economists call it the Matthew effect after the biblical observation that the rich get richer.
Physics arXiv: Do the rich get richer? An empirical analysis of the BitCoin transaction network
"And He has made from ONE blood every nation of men to dwell on all the face of the earth, and has determined their preappointed times and the boundaries of their dwellings," Acts 17:26
Posted by physics4thecool at 4:00 AM