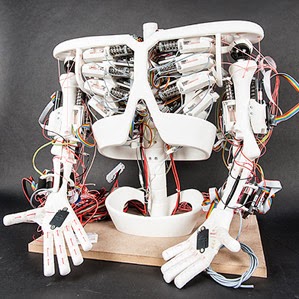 Robots usually look rigid and nonhuman, with joints engineered to avoid the elasticity that can make their movements less predictable and harder to control. Roboy, a robot developed by Rolf Pfeifer and colleagues in the Artificial Intelligence Lab at the University of Zurich, is an example of a different approach that is slowly gaining momentum.
Roboy has a four-foot-tall human shape and a set of “muscles” inspired by the human musculoskeletal system. The plastic muscles work together via electrical motors and artificial tendons. Tendon-driven systems like Roboy mimic the flexible mechanics of biology, and could result in a new class of robots that are lighter, safer, and move in a more natural way.
“If you’re interested in just getting a job done—in a particular movement or something—then we have traditional methods that are based on motors or joints,” says Pfeifer, who directs the Zurich AI lab. “If you’re interested in more natural kinds of movements, tendon-driven technology needs to be explored.”
Technology Review: Some Robots Are Starting to Move More Like Humans
Posted by physics4thecool at 4:00 AM