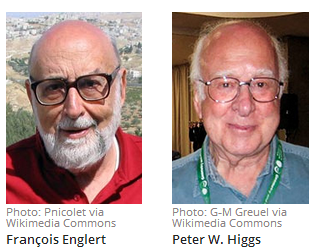 The Nobel Prize in Physics 2013 was awarded jointly to François Englert and Peter W. Higgs "for the theoretical discovery of a mechanism that contributes to our understanding of the origin of mass of subatomic particles, and which recently was confirmed through the discovery of the predicted fundamental particle, by the ATLAS and CMS experiments at CERN's Large Hadron Collider"
The Nobel Prize in Physics 2013
Physics Today: Francois Englert and Peter Higgs share 2013 Physics Nobel, Charles Day

And we have Satyendranath Bose, the Indian after whom the boson is named.


Nanos gigantium humeris insidentes...I can't describe the feeling. The Nobel is more than a noble endeavor: it is the culmination of a lifetime of adhering to and triumph of the Scientific Method, testing and retesting hypotheses; weathering the withering criticism (and in many cases, wagers) against your theories being incorrect, and finding out in the lab that they are correct, unique and novel. I am astonishingly happy for these men, their work and the work they're sure to inspire; physicists working in labs and researchers yet born. It is emotional, not unlike witnessing a birth of a new chapter in our understanding of the universe.
Start noticing at 0:51